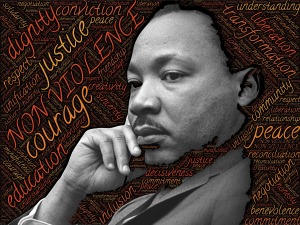 I watched the movie Selma Monday night.  It was Martin Luther King Day and I was looking for inspiration for my Wednesday night Meditation and Mindful Musings Service in his honor.  The movie left me with the tears I knew would flow the moment I tuned in. As the final epitaphs flashed upon the screen next to the faces of the major players I felt the emotion building.  And then Martin’s face was on the screen. The letters appeared one at a time. I knew what they would say. I had seen the spoiler in 1968. I braced myself. And then I cried.

Such a beautiful soul with a vision so much greater than himself. I cried because he was gone. And I cried because of what he had shown me.  I cried because he was so young. He was just 39 years old. He’d only just begun. Yet he had accomplished precisely what he came here to do and be; to be the Light of God expressing, to awaken sleeping souls and to raise awareness and consciousness in a much too slowly evolving country. This he did. He had a big dream and he stirred that dream within the hearts of many.  Yet still there were so many who could not yet see.

In a recent discussion on racism, the term “white guilt” was mentioned.  It was suggested that all white people carry guilt over slavery and the long, lingering energies of racism and inequality.  I thought deeply about that as “guilt” did not feel right to me. It was not the right word. Not for me anyway.  Shared responsibility perhaps, but guilt was not it. I thought perhaps that it was compassion that was somehow being mistaken for guilt because certainly I felt that. But that wasn’t quite right either. Shame. That was more like it. I feel shame. Not personal shame but shame for humankind still capable of such atrocious acts. I feel confusion and anger. I am baffled at how any intelligent being can justify such cruelty to another being for something as arbitrary as skin color. I am angry that beautiful, intelligent, loving people had their lives cut short because of inexplicable hatred. I am angry that it continues.

And then I take a breath.  I know that shame is a non-productive emotion.  Although it serves to show us what we don’t want to do, it cannot take us where we want to be. And so it must be released like molting skin or extra eyelids that cloud the vision.  Likewise, anger wallowed in serves no purpose. But used instead as a catalyst for growth and transformation it can direct us toward a greater end. That requires Love. It requires Faith. Anger, requires a greater Vision, a greater dream to direct its powerful energy toward a higher goal.

Rev. Dr. Martin Luther King, Jr. had a dream. He had what Jesus called “eyes to see,” and I “thank God Almighty,” that his dream is awake and alive in me. I honor him today by tuning in to that dream, by living it as the Truth I know. I honor him by sharing and cultivating that dream and never allowing it to fade. I honor him by allowing my heart to feel the pain of those who have been harmed and treated less than the beautiful souls they are, and then, to feel the Truth that right now unfolds itself in millions of hearts working together to let freedom ring and liberty finally made real.

Rev. Eileen is an ordained, Unity minister currently serving Unity of Livonia in Livonia, Michigan. She leads a Sunday service at 10 am and a Wednesday night Meditation and Mindful Musing service on Wednesdays at 7 pm.